Craig Smith Music, based in Lancashire in the North West of England, is run by freelance professional session musician Craig Smith and operates throughout the UK. Craig is available as a live musician; a studio recording session musician; a theatre and film composer / arranger; and a live touring band and theatre musical director. 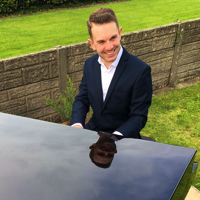 In recent years, Craig has become firmly established as one of the most highly-regarded and sought-after event pianists and wedding pianists in the UK, playing around one wedding every two days in busy Summer months.

Craig performs at over 100 weddings and events a year, and is the recommended pianist at approaching 50 venues UK-wide. Prices currently start at £450, with whole day packages starting at just £700, and Craig is available to entertain or provide background music for any part of your event from guests' arrivals to evening receptions either solo or with other musicians and bands.

Craig is available as a session musician and has shared stages with such artists as Tinchy Stryder, Paloma Faith and Pixie Lott as well as recording for others, even Bryan Adams! He works with touring production companies and in various live original and function bands, as well as recording in UK recording studios.

Craig is available as a composer / arranger, composing short pieces for events and also writing film, documentary and musical theatre music. He also works as a theatre musical director, conducting and playing for musical theatre and live music shows and tours throughout the UK.

Craig is available for commission as a composer. The majority of his portfolio is in musical theatre scores, and bespoke compositions for solo piano and various small ensembles for use at weddings and similar events. Craig is also available as a documentary music and film music composer and editor. As well as composing, Craig works as an arranger, and can create a version of almost any piece for any combination of musicians. Want a string quartet to be able to play your favourite rock song? No problem!

Craig is available as a musical director in both theatre and for live bands. His most recent theatre jobs as a professional musical director (MD) have seen him direct live music productions in theatres, including The Gary Barlow Live Tribute show and Contempo Productions Ltd's Opera Boys UK tour. His last musical theatre projects included RENT, Footloose, and Jesus Christ Superstar. He is regularly called on by local agencies and management companies to MD live bands for singers looking to showcase their studio work in a live environment, and has also worked in a consultancy role advising managers on the best musical direction to take their younger artists.

Through his time as a degree student at the world-famous Liverpool Institute for Performing Arts, and his subsequent live and recording session work, Craig has an extensive list of professional session musicians on whom he calls when pit musicians are required, guaranteeing a high quality of performance on any project he directs.

Craig performs regularly across the country with several bands and artists; recent high profile gigs include support work with Paloma Faith, The Noisettes and Tinchy Stryder, plus a recording session on a Bryan Adams track. He specialises in musical direction and musical supervision, and is currently touring as MD of the band for Contempo Productions Ltd's The Vintage Boys Rock 'n' Roll tour in the UK, having previously directed their classical crossover show Opera Boys. He is musical supervisor on Soundsmiths Promotions Ltd's various theatre and live music products. Craig is a popular booking as a 'dep' and session musician and he also performs as a pit musician in theatres.

Craig performs solo wedding piano music at weddings through North West Weddings & Events Ltd, as well as working in wedding bands and with popular acoustic 'Live Lounge' singer Kate Torevell in Acoustics By Kate. Craig and the other musicians he performs duos with perform wedding music throughout Lancashire, Merseyside, Greater Manchester, Cumbria, Cheshire and West Yorkshire. Craig is available for both wedding ceremonies and receptions playing classical, swing, pop, rock or soul music, or any combination of these. He has performed at most of the region's hotels and halls.

Craig was trained at the acclaimed Liverpool Institute for Performing Arts (LIPA), co-founded by Sir Paul McCartney (from whom he received his BA Music degree, with first class honours). He had top-class tuition from renowned practitioners in record production, composition, arranging and both solo and ensemble performance. Offers of work in Europe, The United Arab Emirates and The United States followed.

In addition, Craig works as a musical supervisor and consultant for several local and national agencies, venues and production companies.

Craig performs as a regular member of popular indie party band IndieFly and as a session musician for Acoustics by Kate. Craig also works as MD or within the band on live band tours and theatre tours, and takes "deps" with other bands and acts, standing in for other musicians.

Read lots more about Craig's current and past projects on the Biography Page.